Home  /  The History in Pictures 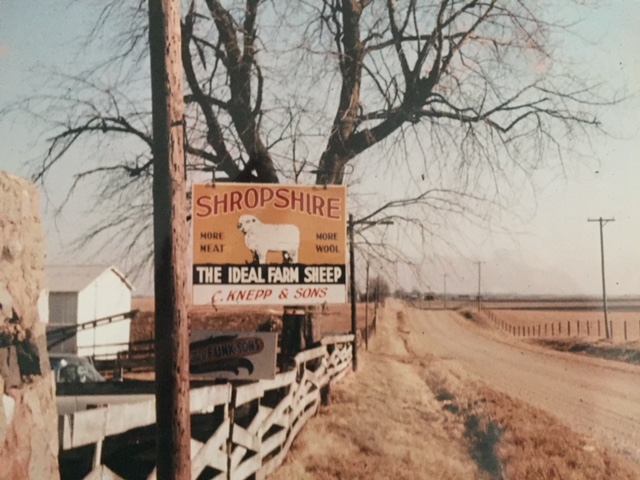 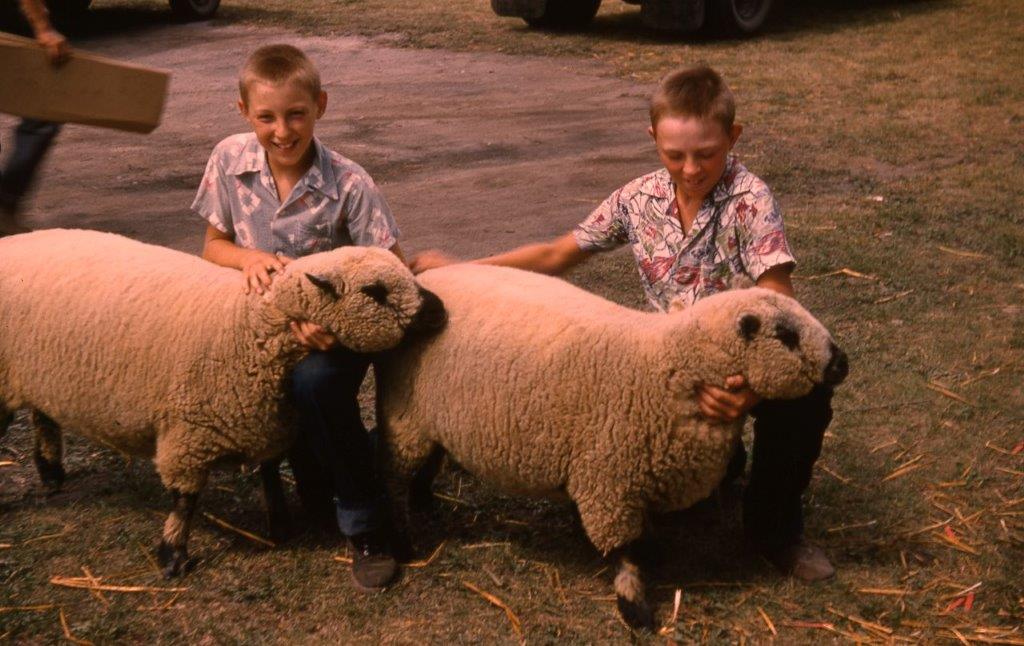 Wally and I with Champion and Reserve Champion Ewes at the 1955 Tazewell County 4-H Fair, Pekin, IL.  These lambs were sired by the Everett Glasgow ram that we purchased the prior year.  Everett had judged our county fair the previous year and many years after. 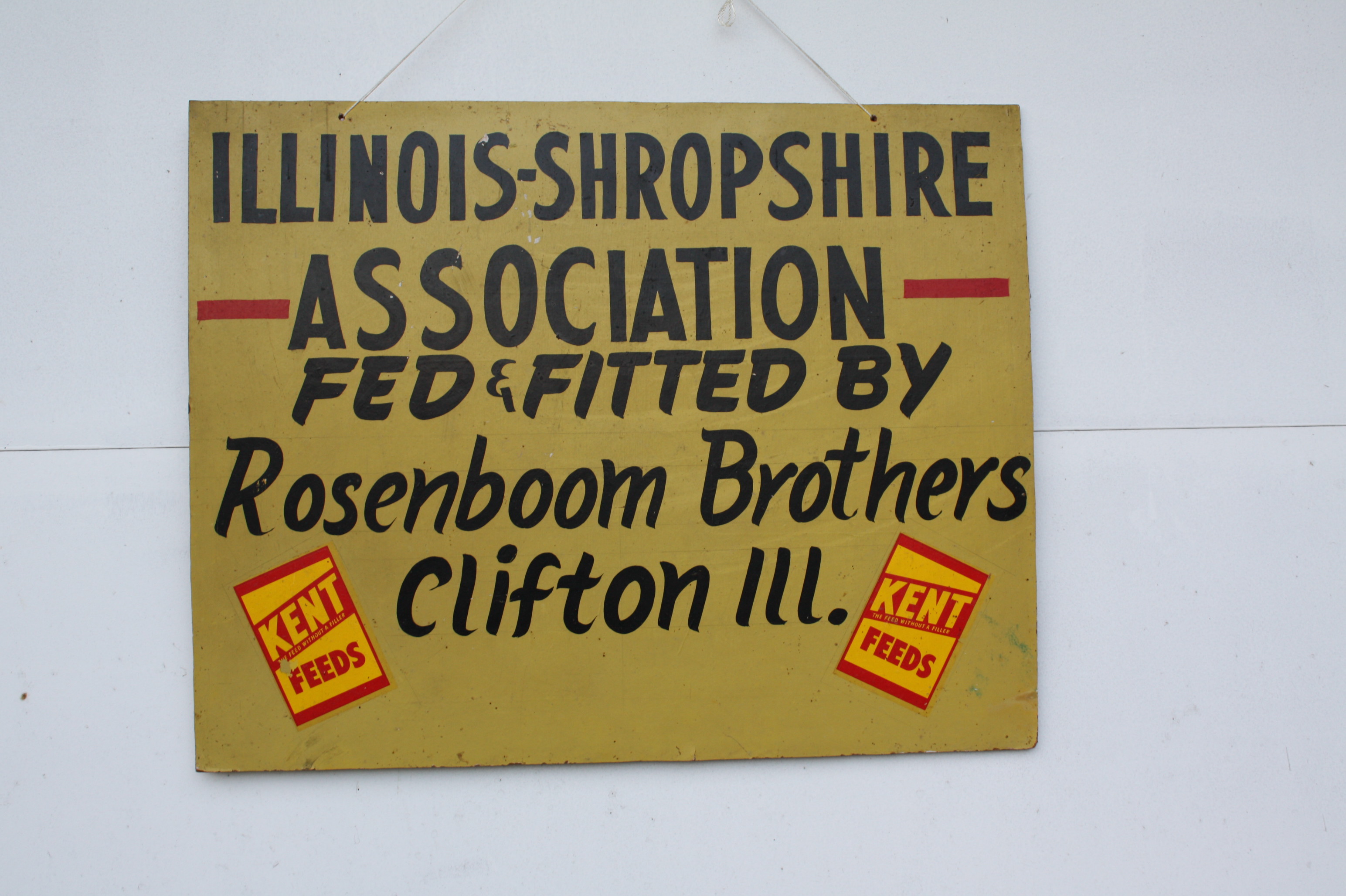 Sign for the 1956 carlot of lambs Shown at the International Livestock Show, Chicago. These lambs were bred and raised by members of the Illinois Shropshire Assocition, we had a number of lambs in this group.  They were fed, fitted, and shown by Rosenboom Brothers. 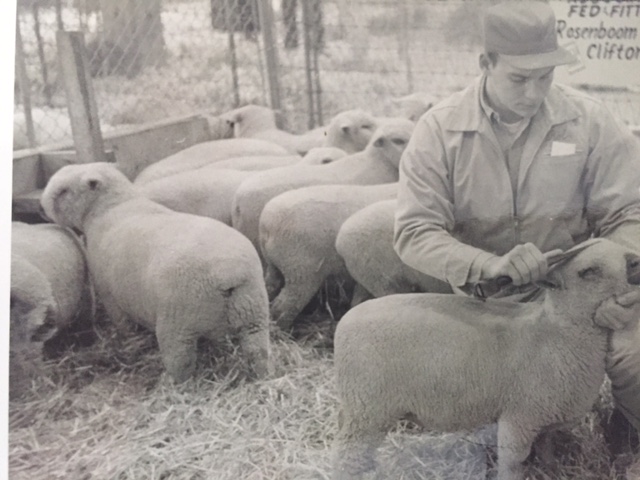 These are some of the lambs in the carlot.  Rollie Rosenboom trimming. 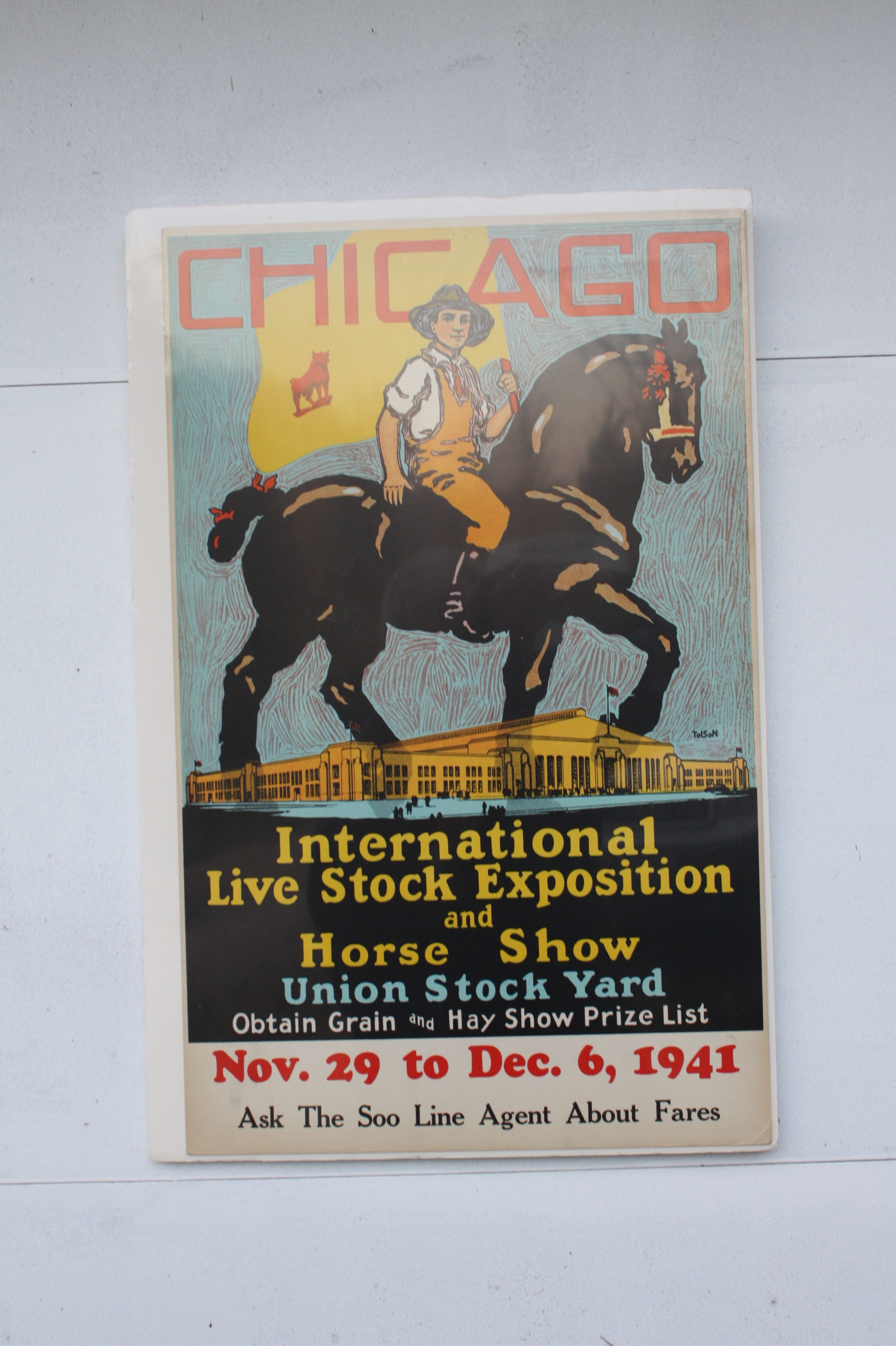 Publicity sign for the International, some years before in 1941. 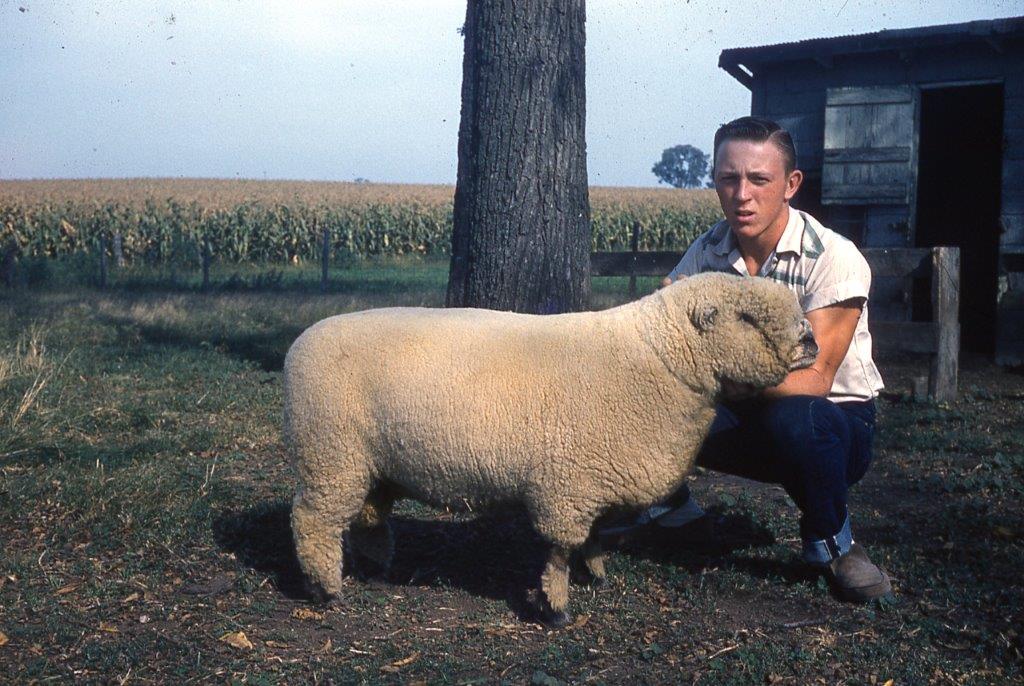 This is the ram we purchased from Jim Merrick, Clifton IL in 1957.  We called him “JJ”.  Mr Merrick was the prominent breeder in Illinois at that time and I believe was President of the Illinois Shropshire Breeders Assn when we all  showed the Carlot at the International Livestock Show. 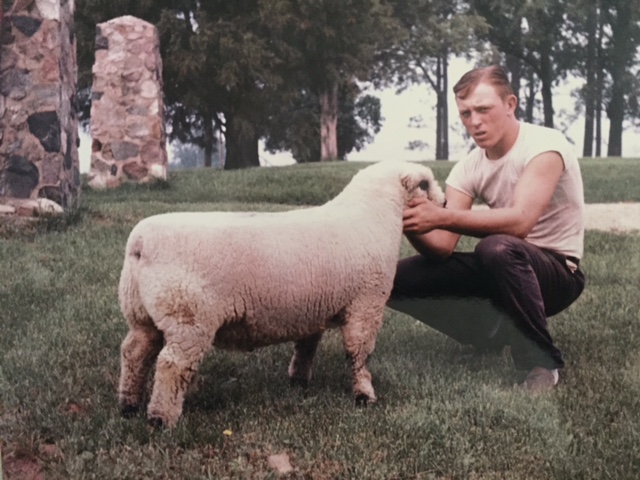 Eberspacher ram purchased in Nebraska in 1960 shown here by Don.  He gave us some more  size and extension 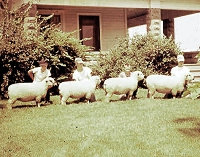 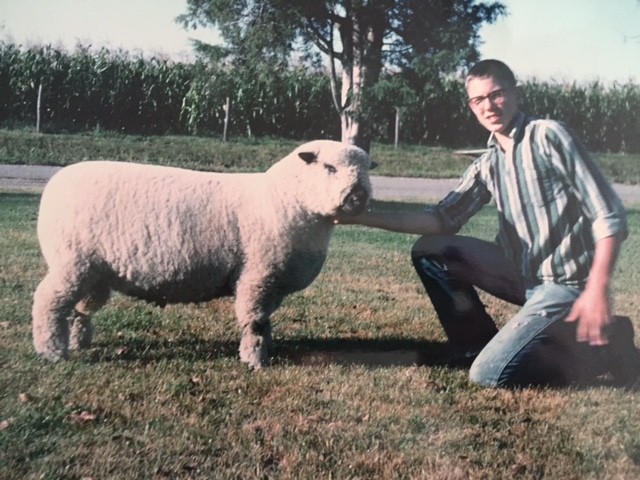 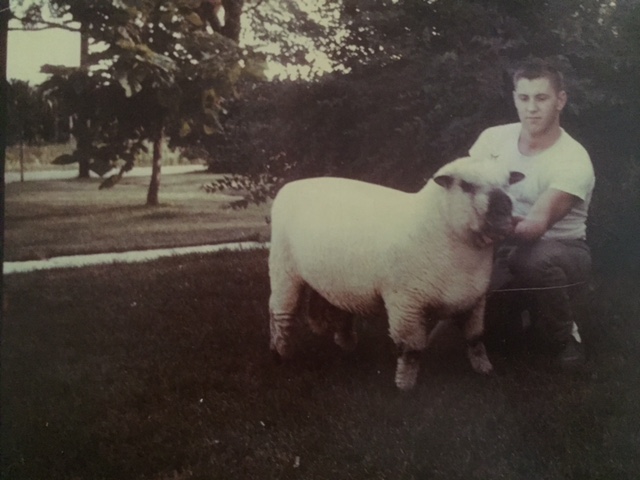 R.C. Thurman ram purchased in Ohio in1964, the first of our more open headed rams.  Shown here by Wayne. 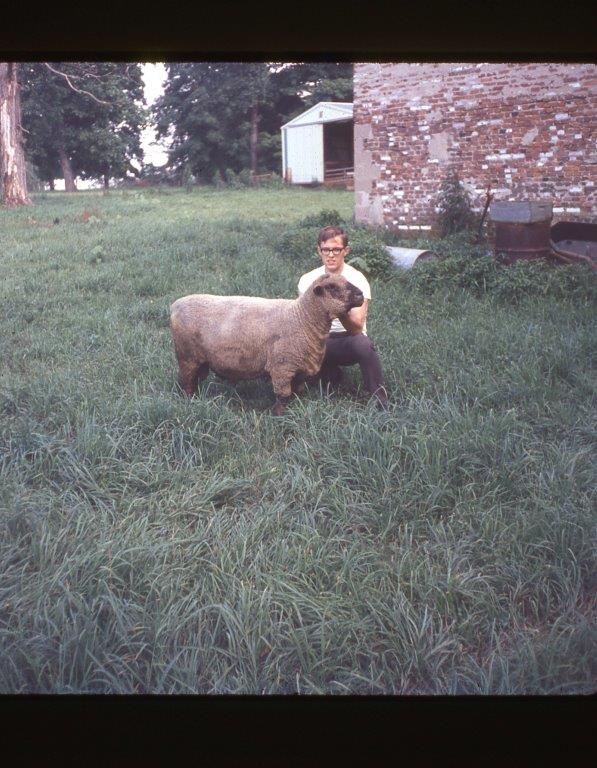 The last of our rams, a Mckerrow ram, before we all were in college and sold out to Enid Schlipf in 1969. 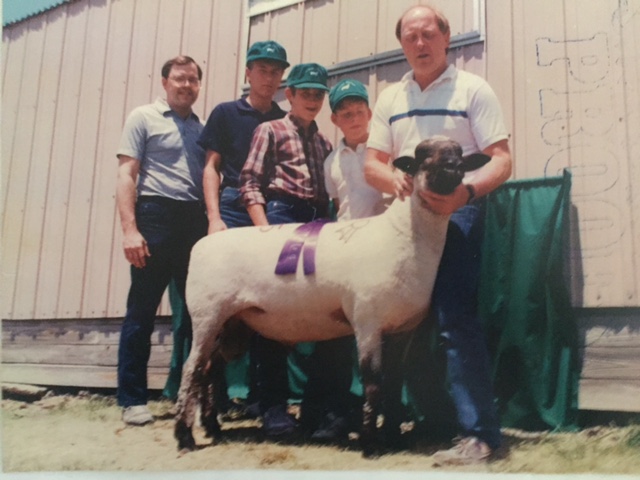 We got back into the breed in 1985 when Matt was 9 by buying a couple of ewes from the Buckhams. A year later my brother Gary and his two sons Keith and Doug joined the group and we purchased the Champion Ram at the 1986 Shropshire Spectacular, a Buckham ram. All of the current flock have him in the pedigree background. 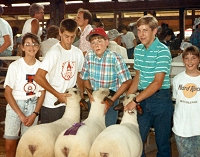 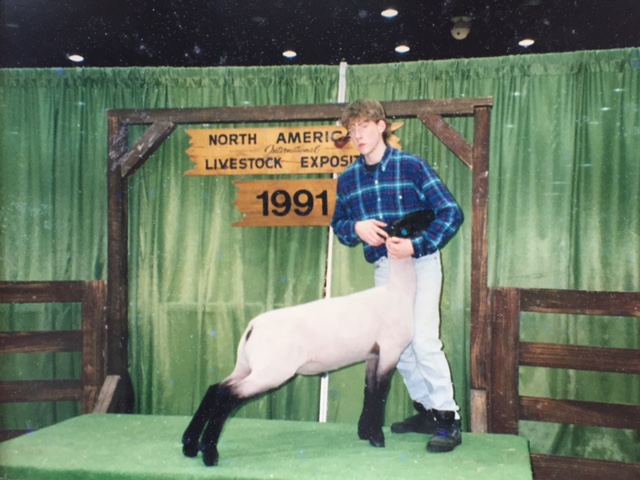 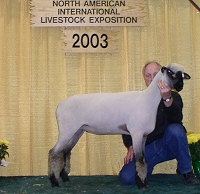 Louisville 2003, Knepp 308, the second of our frame type female line pedigrees (the first being Knepp 205) built out of our flock of thicker shorter bodied wether type influenced ewes developed between 1986 and 2001.  Her pedigree is a big influence in most of our current flock.  She placed 3rd in NAILE ewe lamb class that year.

In 2007 Gary and Sue moved to West Virginia and we moved the sheep to Brian Mohr’s Farm at Carlock IL.  Brian and Jill, and their family put us on a winning streak in the show ring and sales for the next six years. 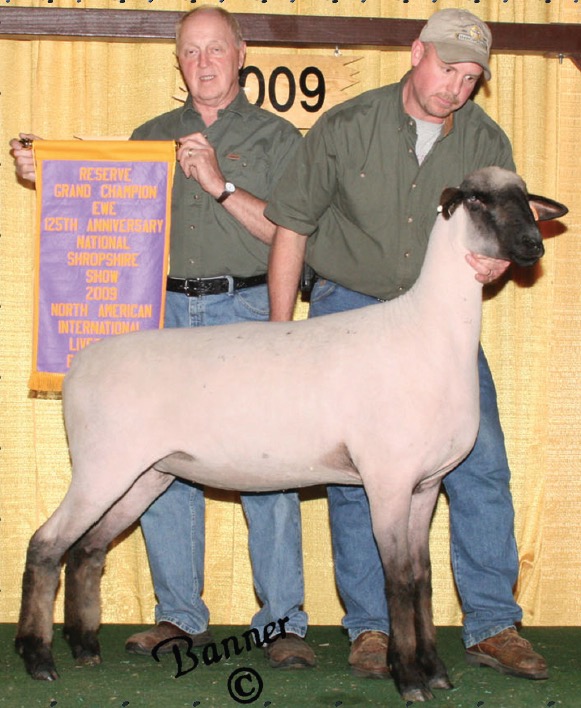 Louisville 2009, 125th Anniversary Shropshire Show, Knepp 810, Reserve Grand Champion Ewe, the pinnacle of our frame sheep program. Picture here with Brian Mohr, the person who made our show program work, and myself.  810’s Dam, Knepp 205, is the other ewe pedigree, (along with Knepp 308) that provides the backdrop for todays flock. 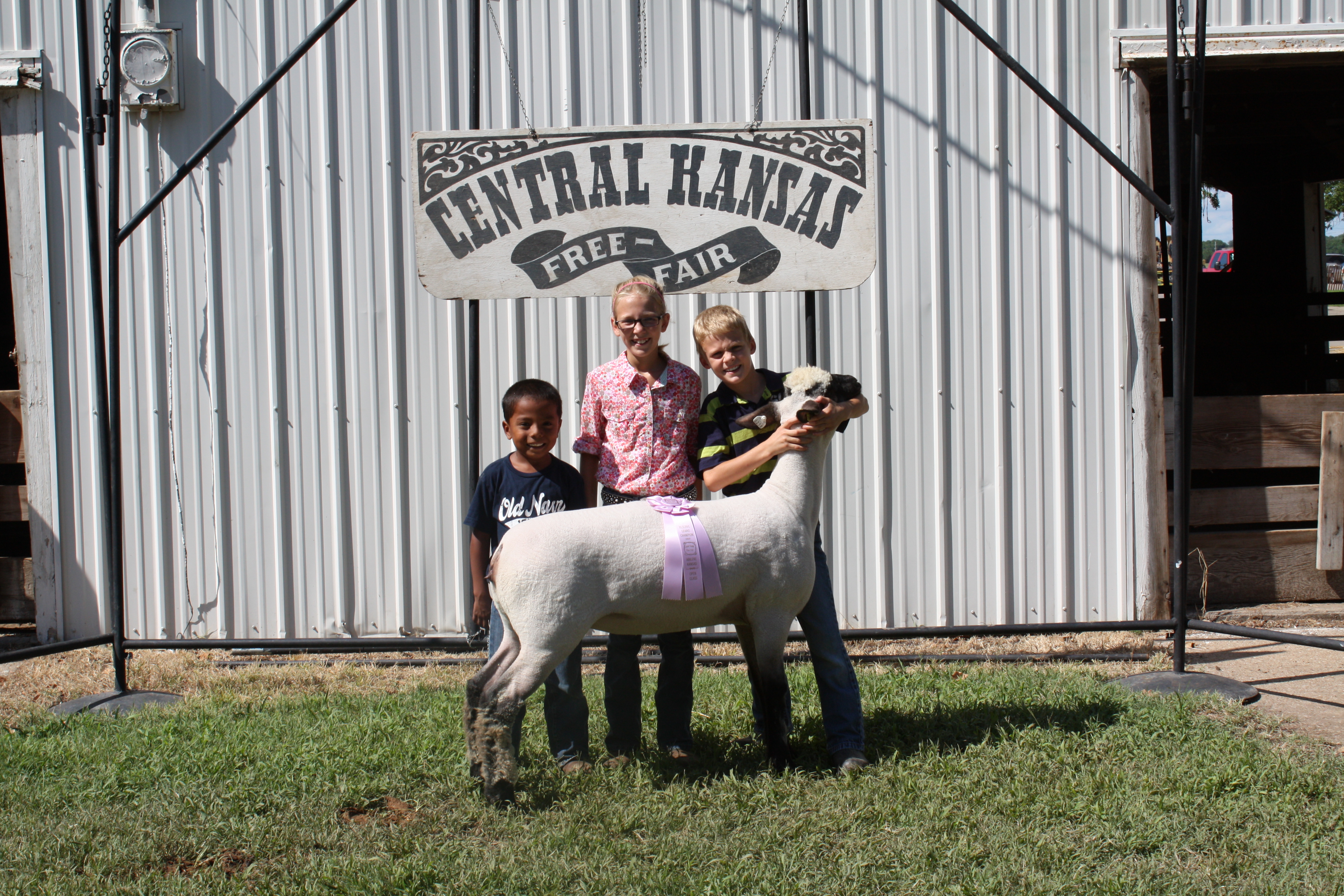 In 2011 Matt and Michelle and their family moved to Kansas. Here, Santiago, Grace, and Dillon had Champion Shropshire ewe on a ewe lamb, Knepp 1109 at the 2011 Central Kansas Fair, Abilene, KS 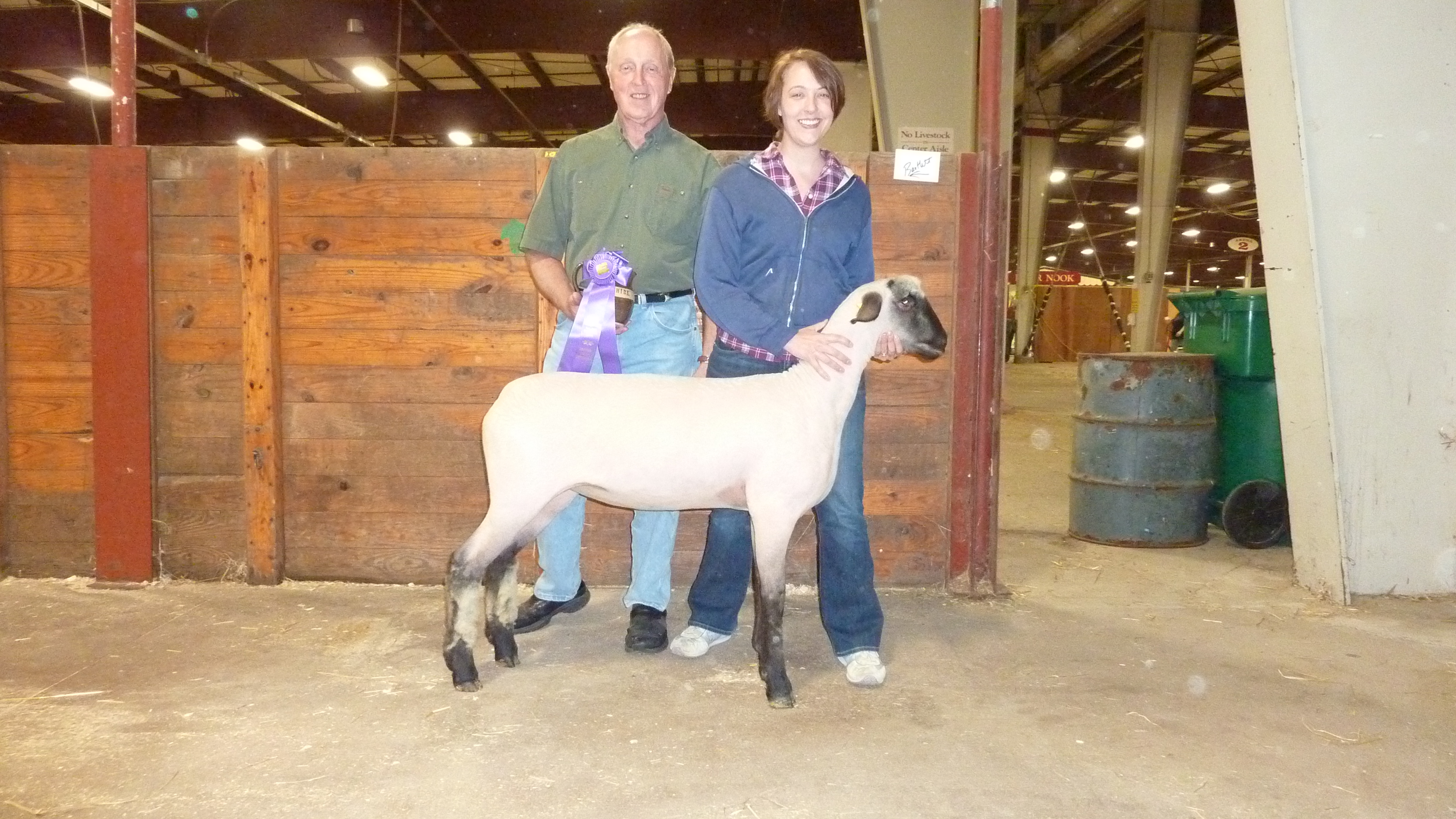 Knepp 1109, Junior Champion ewe at 2011 BIG-E National Shropshire Show. She got around that year. had won Champion ewe at the Central KS show for the Grandkids, was Reserve Champion Ewe at the Illinois State Fair, and then did well for us here at the Springfield MA show.  Our daughter Sarah, who lived in Brooklyn at the time, joined us for this show. 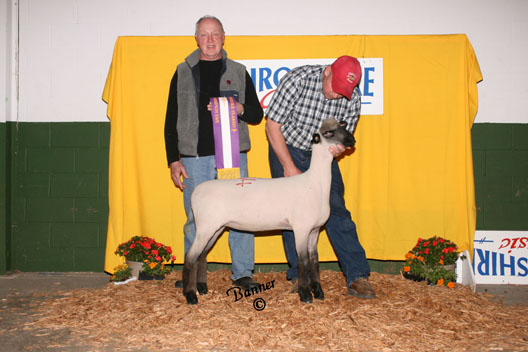 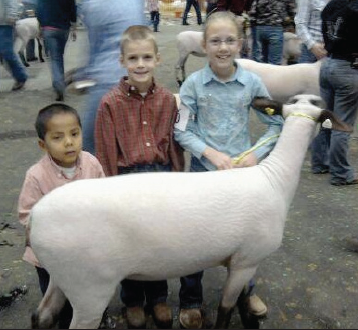 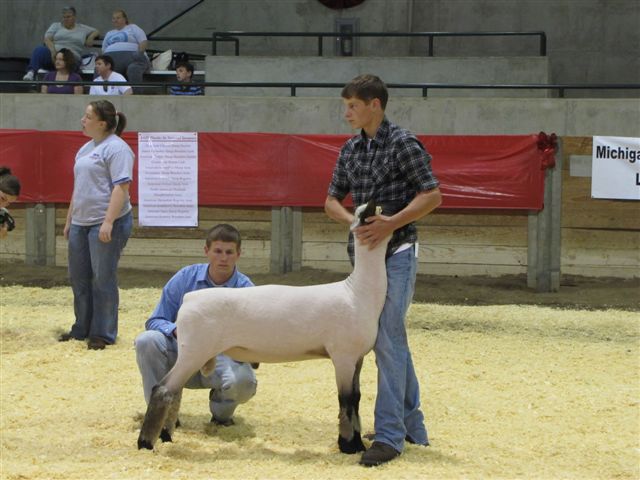 Whittaker 1004 “Outrageous”, Champion Ram at 2010 All American Junior Show.  We purchased him along with City Limits and used him as stud ram. 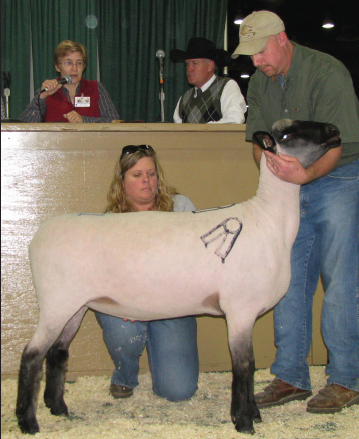 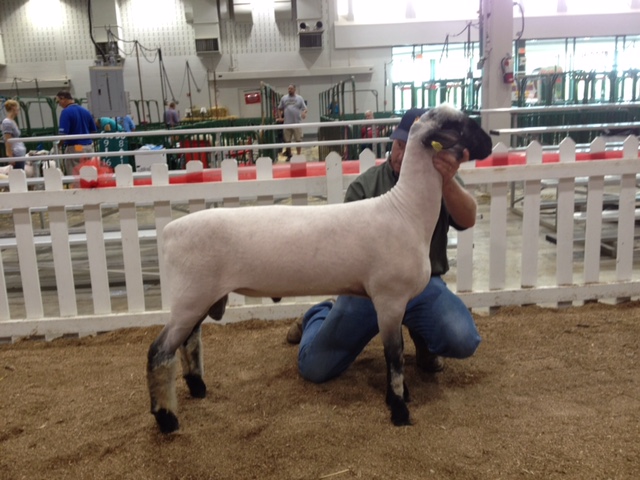 And a few pictures from 2012, the year when we changed direction and moved away from the showring and into production sheep. It may have started for Suzanne and me with a trip to France with our good Lakota friend, “Young Man Afraid of his Horses” and visited friends of his and ours there. This included visiting John Paul, a shepherd who is a friend of the people we were visiting. He and his wife live in a stone house that was built in I think, the 1600’s.  Beautiful place over looking a state owned preserve in the Cevennes area. 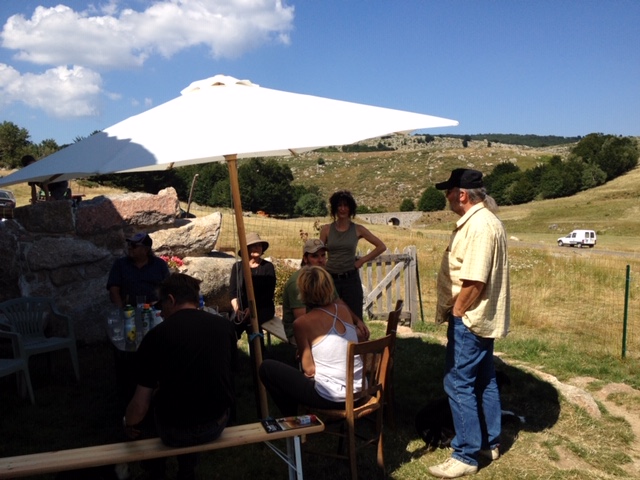 A terrace made for relaxing, overlooking the grazing area. 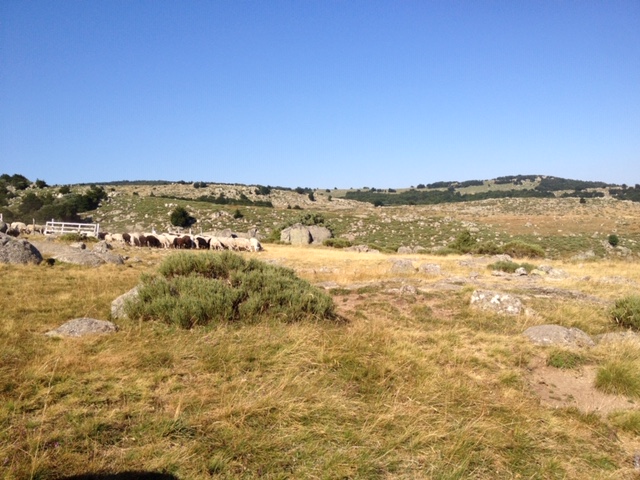 And then to cap the year off, Cody invited me to go along with him to Utah to deliver some rams from his flock and ours and visit one of his Niman Ranch ranchers, the late Clark Willis.  This probably clinched my bug to raise Western type Shropshire Terminal sires. 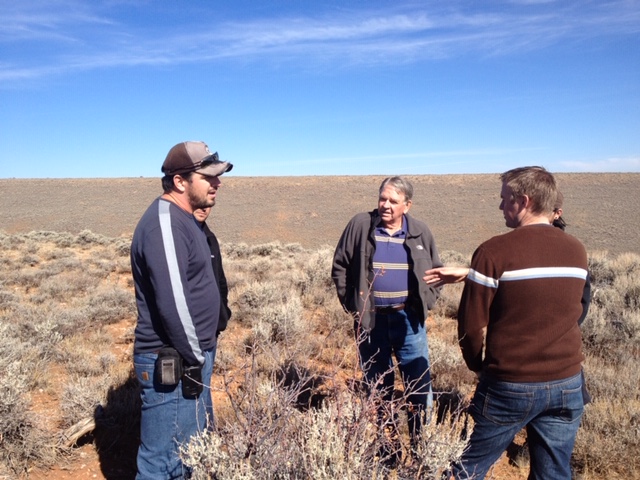 And then I caught this shot of Cody relaxing near Laketown Utah. 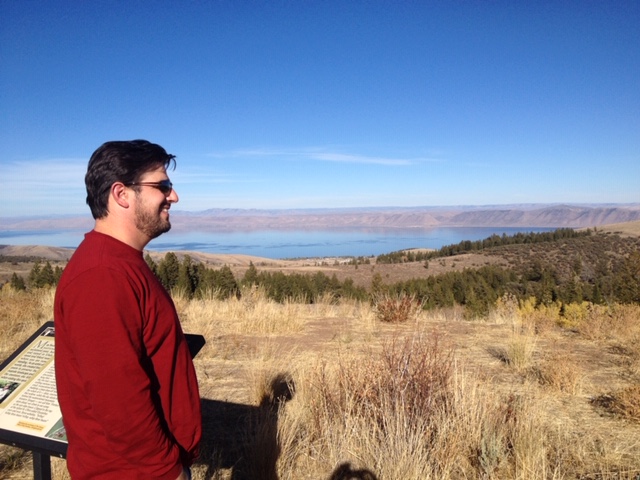 And one final picture from that trip. We met up with my daughter Sarah’s in-laws, Kathy and Julian Negugogor.  Julian is originally from the Basque region of Spain and did some shepherding in this area back in the late 1960’s. Their son Mike married Sarah and in 2016 Lukas arrived. 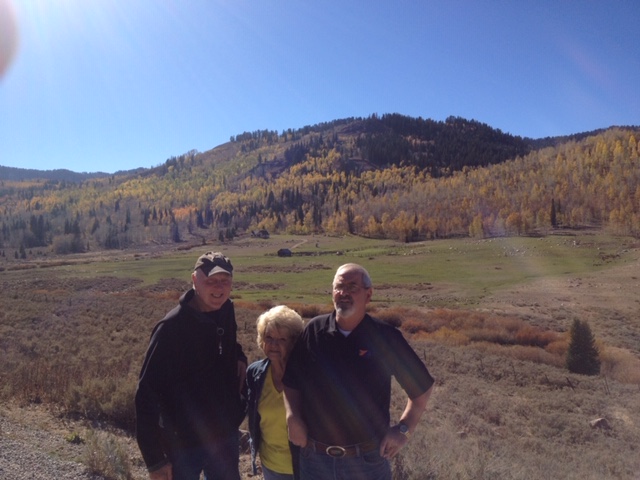